The Hierarchy of Innovation

There is an interesting piece that applies Maslow's Hierarchy of Needs to technological innovation. Of particular interest is this chart he created: 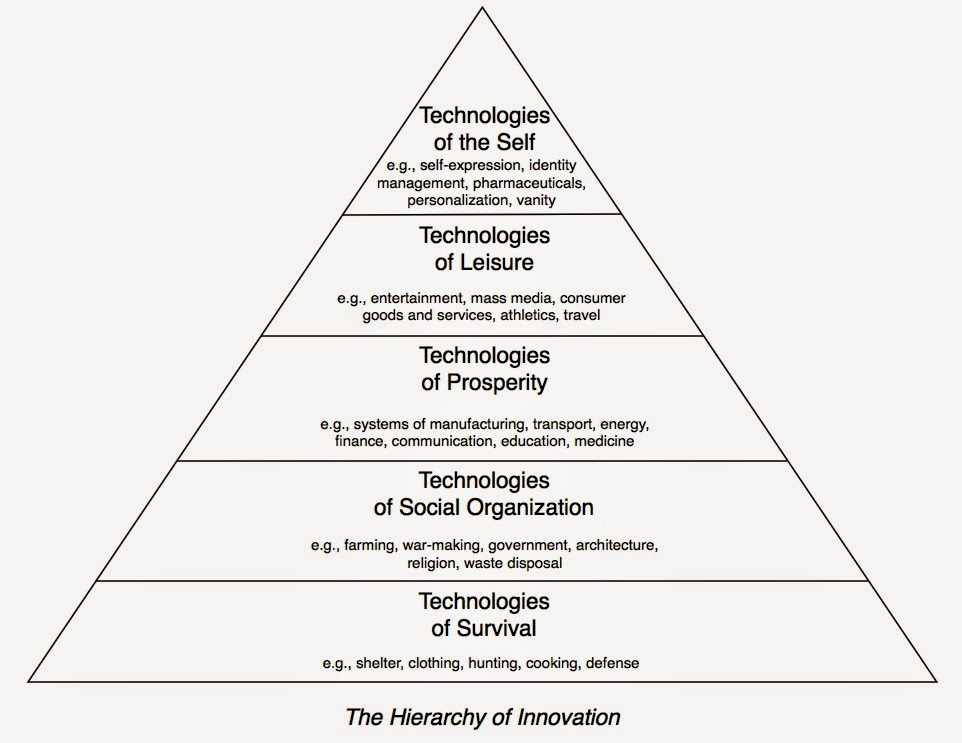 I would like to apply this to Clare Graves' model of psychosocial emergence, but it doesn't quite match the pyramid. It is obvious that the Tribal level developed Technologies of Survival. In fact, many of those things would have to be pre-Tribal -- pre-human, in fact, when it comes to things like hunting and defense. But the Tribal level is where these things are most thoroughly developed in a human sense.

I think it is also obvious that it was with the emergence of the earliest Heroic levels that Technologies of Social Organization emerged. Farming, war-making as we now understand it, government as we continue to practice it, architecture, religion, market trade, etc. were all developed at this level.

Technologies of Leisure can also be seen to have been established earlier, but again, things really take off in the transition from the Entrepreneurial level to the Egalitarian level.

Finally, Technologies of the Self have developed during the Egalitarian period, and are a culmination of their narcissism and decadence.

That takes care of Tier 1. The rapid development of each may be more attributable to Renaissance periods between each, or even the first-flowering of each level, but we also see seeds planted earlier. Of course, Gravesean psychology is itself "messy" -- it doesn't really go through perfectly pure stages. The cosmos is messy, life is messy, and we shouldn't expect perfect delineation in our psychological or social models, no matter how much we would like them to do so.

Still, I would like to see a similar Hierarchy of Innovation developed that could map better on Graves' levels. This is close, but doesn't quite make it.

Also, we would have to deal with Tier 2. Obviously the Technologies of Tier 2 Survival would be quite different from those of Tier 1. What does it mean to be in survival mode for Tier 2? What technologies help with that? And what are/will be the new Technologies of Social Organization? One would expect new institutions to arise.